bamrescue is a command line utility to check Binary Sequence Alignment / Map (BAM) files for corruption and rescue as much data as possible from them in the event they happen to be corrupted.

On ArchLinux and derivatives (Manjaro, Antergos…)

A PKGBUILD is provided on AUR for ArchLinux and derivatives. It is only tested with an up-to-date ArchLinux.

Alternatively, you can install bamrescue using an AUR helper such as yay:

On Debian and derivatives (Ubuntu, Mint…)

Pre-built packages are provided for Debian and derivatives. They are only tested with Debian 8 (Jessie), Debian 9 (Stretch), Ubuntu 16.04 LTS (Xenial) and Ubuntu 18.04 LTS (Bionic).

Each gzip block contains at most 64 KiB of data, including a CRC32 checksum of the uncompressed data which is used to check its integrity.

Additionally, since gzip blocks start with a gzip identifier (ie. 0x1f8b), a fixed gzip method (ie. 0x8) and fixed gzip flags (ie. 0x4), and bgzf blocks include both a bgzf identifier (ie. 0x4243), a fixed extra subfield length (ie. 0x2) and their own compressed size, it is possible to skip over corrupted blocks (at most 64 KiB) to the next non-corrupted block with limited complexity and acceptable reliability.

This property is used to rescue data from corrupted BAM files by keeping only their non-corrupted blocks, hopefully rescuing most reads.

A bam file of 40 MiB (which is very small by today standards) has been corrupted by two hard drive bad sectors. Most tools (including gzip) choke on the file at the first corrupted byte, meaning that up to 100% of the bam payload is considered lost depending on the tool.

Indeed, a whole hard drive bad sector typically amounts for 512 bytes lost, which is much smaller than an average bgzf block (which can be up to 64 KiB large).

Even though most tools would gave up on this file, it still contains almost 100% of non-corrupted bam payload, and the user probably wouldn’t mind much if they could work only on that close-to-100% amount of data.

Let’s rescue the non-corrupted payload (beware: this takes as much additional space on the disk as the original file):

The resulting bam file can now be used like if it never had been corrupted. Rescued data is validated using a CRC32 checksum, so it’s not like ignoring errors and working on corrupted data (typical use of gzip to get garbage data from a corrupted bam file): it’s working on (ridiculously) less, validated data.

bamrescue is very fast. Actually, it is even faster than gzip while doing more.

Here are some numbers for a 40 MiB, non-corrupted bam file: 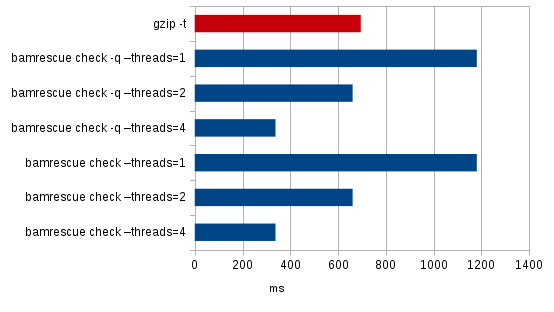 Here are some numbers for the same 40 MiB bam file, with two single-byte corruptions (at ~7 MiB and ~18 MiB, respectively): 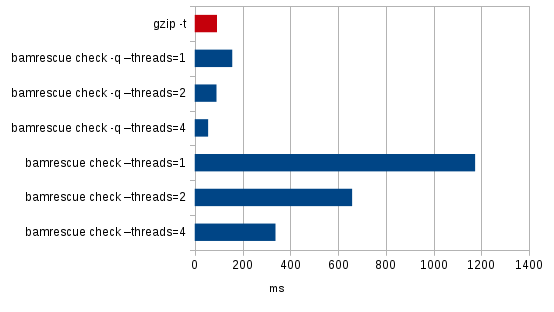 bamrescue does not check whether the bam payload of the file is actually compliant with the bam specification. It only checks if it has not been corrupted after creation, using the error detection codes built in the gzip and bgzf formats. This means that as long as the tool used to create a bam file was compliant with the specification, the output of bamrescue will be as well, but bamrescue itself will do nothing to validate that compliance.

bamrescue is copyright (C) 2017-2018 Jérémie Roquet jroquet@arkanosis.net and licensed under the ISC license.